This is a huge game and there are significant parts of it that I never touched and didn't know much about (which has made it fun to play since it's been released).  While I worked a bit on the Intro, the Toybox, and Pirates portions of the game, I mainly worked on the Monsters University playset.  Particularly the Fear Tech campus.  Fear Tech is mentioned in the movie but we never see it so the overall look was done with regular input from the geniuses at Pixar.  The main idea was that while MU was an eastern, ivy league, Harvard style campus, FT would be a western, technical, Caltech style campus.  So it was a lot of fun to design the visual look of everything with those influences in mind.  Gabe Avila was the designer on this so he did the overall layout, and Ryan Wood was the art director so a fair amount of what you're seeing came from him too.  I won't bore you with who did what, just keep in mind that it was a team effort. Here's some shots of our work:

I also worked with the marketing team for a while and helped set up some of the screen shots that were sent to the press.  Of the ones I did these are a few of my favorites (again, team effort! I'm not taking sole credit): 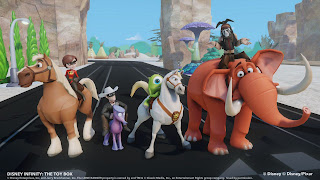 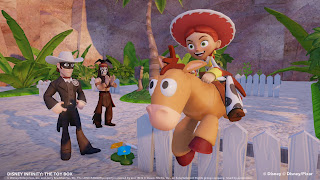 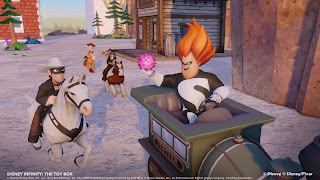 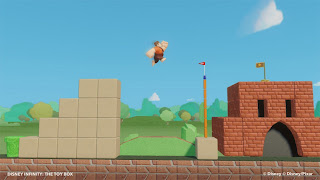 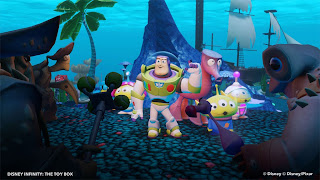 I really loved working on this game.  My son and I have a hard time finding games to play together sometimes.  Either they're too hard for him or boring for me.  Since I received my copy we've played Infinity for hours together, always having a great time.  It was a lot of long, hard work but I think the finished product is something genuinely special.
Posted by Kevin Keele at 12:45 PM

I'm quite certain I'm biased, but you did an amazing job with Fear Tech. Big pat on the back to you, sir.

Will Be Awesome to Finally Play!!!!

Fear Tech in general is awesome, but that monster mosaic(?) wall is the best thing ever. I wish I had an embossed wallpaper of that for my house.

NIce works!
But.. everything over paint Kevin?
Suggestion
RAYmAN ORIGINS vs RAyman LEgends are an excellent to play with more players

So awesome, Kev! Ever since we got our"Randy" my kids have been begging to play. I'm holding off until Christmas though to get it. It looks way fun!

The game turned out great, and we owe it all to you. ALL. TO. YOOOOOOOU.