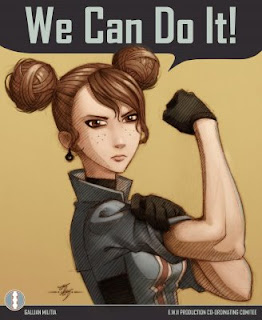 Yes, it's been a while. I've been busy, give me a break. Anyway, it's 2009! What better way to start a year of blogging than with the most important issue of the previous (or any) year: video games. One of those games (which I got for Christmas - thanks Heather) is called Valkyria Chronicles. 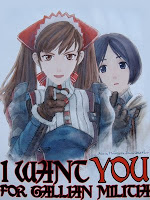 The game takes place in a fictional version of 1930's Europe with situations resembling those in second world war. You play a squad leader for the small country of Gallia, desperately struggling to fend off "the Empire" which is fighting to gain control of their land and it's ample supply of Ragnite (their main source of energy).It's a tactical RPG which you play both from a bird's eye view of the battlefield (selecting which unit to move) and from a third person view (within which you actually move the unit, playing like any 3rd person shooter). It also uses a clever turn-based combat system and a distinctive art style. An ad for the game has already played off another popular war poster featuring Uncle Sam (itself based on an earlier poster from Britain featuring Lord Kitchener).I like this image so much I wanted to do something similar and since one of the characters in the game is named Rosie I thought Rosie the Riveter would be appropriate.

Back to the games of 2008: Game of the year? Metal Gear Solid 4, followed by Valkyria Chronicles and Little Big Planet.
Right now I'm playing:
Valkyria Chronicles - If you can't tell I love this game. A lot.
I've recently finished:
Mirror's Edge - The concept feels fresh and the graphics are phenominal. When it's working it's wonderful, but unfortunately it becomes too frustrating too frequently in the latter part of the game. Still, definitely worth a look.
Gears of War 2 - I played this after hearing people go on and on about it on the gaming blogs and podcasts. Due in part to these lofty expectations I came away from it feeling it was only marginally better than average and certainly nothing special.
Prince of Persia - I ended up really liking this game. It's fun to play and nice to look at. It did feel a little repetitive by the end, but it's a great new direction for one of my favorite franchises.
Dead Space - A competant blend of Bioshock and Resident Evil 4 with a bit of it's own identity mixed in. I hoped the game would be more frightening but enemies are thrown at you so relentlessly that the tension never has a chance to build.
Anyway, what are you playing? What was your favorite game last year?
Posted by Kevin Keele at 11:18 AM 14 comments: