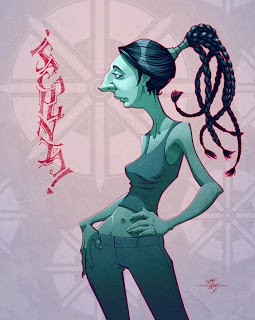 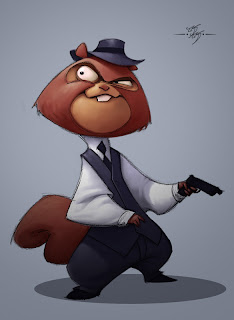 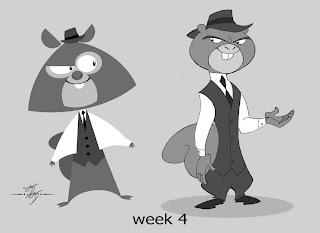 Here's the second batch of drawings from the character design workshop here at Avalanche. The last filter we put our characters through was style.The lower image is just a couple of the style explorations I tried, the one on the left is inspired by, but not an exact copy of Miah Alcorn's art. The one on the right is inspired by Stephen Silver. For the final I took the elements I liked from the style exercise (mostly from Stephen Silver) and worked my own style back into the character to hopefully end up with a design that is consistent and appealing. We were asked to render the final image in a way that provided enough information for a modeler to build it in 3D. I'm considering building a model of him myself, we'll see if I end up having the time or not.
Posted by Kevin Keele at 8:39 AM 13 comments:

My fellow artists and I at Avalanche have been putting ourselves through a character design workshop. The character must first be a squirrel, muskrat, or badger and appeal to an audience of boys and girls age 7-11. The character should fill a "helper" role for the player in an action/adventure game. We started the first week with our initial designs and have been critiqueing ourselves and each other on how we can make him/her/it better the next week. We've also been putting our designs through four filters, one each week: Contrast, Novelty, Story, and Style. Week 1 was my initial design, inspired in equal parts by Phoenix Wright, and Sly Cooper, and named after the greatest private detective of them all. He mainly helps the player by analyzing whatever evidence the player finds in their quest. Week 2 I added more contrast to the design by (among other things) thinning the body, enlarging the head, moving the facial features from the center of the face and intensifying the eyes. Week 3 I combined the next 2 filters (since I actually missed a week), for Novelty/Familiarity I made the shapes more unique and tried to unify the squirrel elements. For Story I removed the coat and added a hat which I feel better communicates the background and personality of my squirrel detective. I've so far found the workshop to be extremely helpful and I feel like my design has improved. The final design should be done in the next few weeks. Head over the the Avalanche Blog to see everyone else's.
Posted by Kevin Keele at 2:52 PM 7 comments: