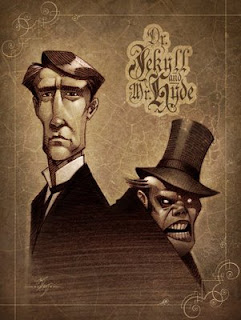 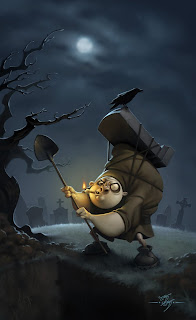 The Evil Lord of Destruction! 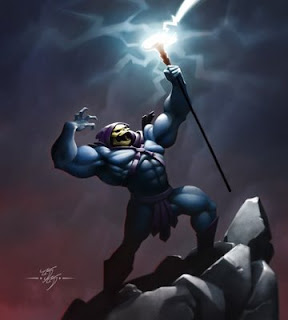 I've never loved anything the way I loved He-Man when I was 5-7 years old. This was when I called Saturday - Cartoon Day. My brother and I would get up so early Saturday mornings that we would watch the color code thing until the broadcast would start at about 6 am and be swept away in a blissful haze of terrible animation and toy commercials for 4 hours. Smurfs, Thundarr the Barbarian, Transformers, Thundercats, Voltron, and, of course, He-Man and the Masters of the Universe. The 80's was a great time to be a kid.
Posted by Kevin Keele at 2:30 PM 22 comments: 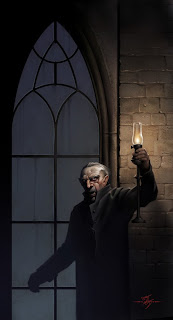 "What manner of man is this,
or what manner of creature is it in the semblence of man?"
-Bram Stoker
I love the original Dracula novel, but, as is almost always the case, none of the film adaptations have portrayed the spooky specter the way the book does. Bram Stoker provides the following details:

-Dracula has a full mustache, but is clean shaven everywhere else.
-He is an old man with aquiline features and slightly pointed ears.
-He has bushy eyebrows and a full head of hair but is balding around his temples.
-He has stubby fingers and hairy palms.
-He dresses in black and has a cruel look in his eyes.

This is a far cry from the suave gentleman many picture when they hear the name Dracula. I decided I wanted to paint the famous bloodsucker and stay fairly close to the original description. I found that it's hard to make a mustache scary. Some of my sketches look like a hook-nosed Borat with a mohawk. I was convinced it could be done, however and I eventually ended up with the sketch that turned into this painting. I'm quite pleased with it, and it sorta creeps me out a little. 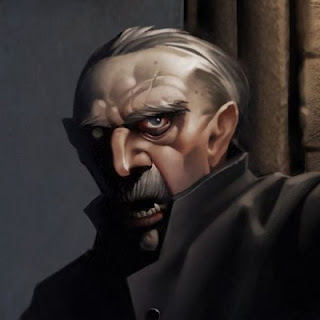 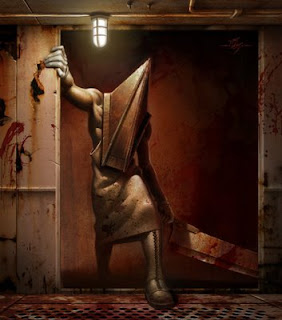 Within the last month two of my favorite video game franchises have had new releases. Dragon Quest IV hit a few weeks ago and Silent Hill: Homecoming hits retailers today. I figured there's no better way to celebrate than with a painting of everyone's favorite Silent Hill denizen, Pyramid Head! It's also a wonderful way to begin the month of Halloween. Few games can compete with the immersive atmosphere and interactive narrative most Silent Hill games have. I'm always looking forward to going back there.

Silent Hill fans (myself included) are fairly intense when it comes to the foggy town. Many are intelligent and interesting. But among any fanbase can be found the fanboyish whiners lighting up the internet with their self important observations and complaints. Team Silent out of Japan created and developed the first 4 games, the first 3 of which are held in the highest regard. SH4 was a bit of a departure for the series, it was more experimental and openly surreal. It was met with much criticism from the SH fanboys. I enjoyed it but fatigue for the series was becoming evident in Team Silent's work. When speaking of the future of the series the creators wanted to push it even further away from the traditional Silent Hill gameplay and atmosphere. Fans complained. So the next game (SH Origins for the PSP) was handled by another studio and some (myself included) found it to be a competent and worthy addition to the series. Homecoming was also handled by an outside studio and so the fanboys have been outspoken about their disapproval of this from the day it was announced. They all object to the series being handled by someone else, despite the fact that the original studio has all but said they don't want to make any more and if they were to they would be very different from what we've come to expect. Personally I'm happy either way, I like the original games enough that I'm fine with playing variations on the theme or letting the series evolve. I get irritated by those who just want every new SH game to be a remake of SH2 (rightly considered the masterpiece of the series though the first game is my personal favorite). Homecoming could very well be no good, reviews have been all over the map (some rank it as high as 95% and others as low as 60%) but that's beside the point. Making up your mind about a game before you've played it is unfair. Being so exacting in your expectations that you're nearly impossible to please does not make you an intelligent and discerning individual. I know the internet will never be lacking in pretentious people with unfounded opinions, but they still bug me.
Right now I'm playing:
Dragon Quest IV: Chapters of the Chosen - The DS is the perfect home for the DQ games, I'm enjoying every minute of this one.
Half-Life 2: Episode 2 - I've been enjoying this more than the original HL2 or Episode 1 -and I loved those!
I've recently finished:
Killzone - I played this because the sequel looks so cool. Unfortunately it kind of deflated my enthusiasm. It had some cool moments but overall...meh.
Anybody else playing anything good?
Posted by Kevin Keele at 6:53 AM 11 comments: