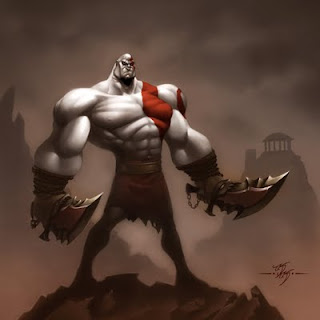 The God of War Collection ships today and I've been playing the God of War 3 demo over and over so I've been in an angry greek mythology kind of mood. I have a hard time pinning down what I like so much about the games. The main character is a horrible person. The fighting system is fun, but not incredible. The narrative is frequently cheesy but always feels appropriate for the subject matter. The rush of pure testosterone laced adrenaline the game provides is nice. I also really appreciate any franchise in any form willing to tell an epic fantasy story without just feebly copying Tolkien.
I also recently had a Final Fantasy 7 marathon. I played Crisis Core, Final Fantasy 7, (watched) Advent Children, and Dirge of Cerberus, all back to back which was quite an experience.
Currently Playing:
Uncharted 2: Among Thieves - Game of the year! I'm just a few trophies away from platinum (I finished it on Crushing the other day). Phenominal in every way.
Metroid Prime Trilogy - I like the Wii controls and all the games are great so I'm loving this.
Recently Finished:
Batman: Arkham Asylum - So much better than any other Super Hero game I've played. Finally someone got it right. Incredible game.
Final Fantasy VII: Dirge of Cerberus - The great production values and fondness felt for the characters by FFVII fans isn't quite enough to make up for the uninspired gameplay.
That's it for me, pretty dry until my birthday/Christmas next month and I get all the great games that have and are coming out this holiday season. I really want to play through the campaign of Modern Warfare 2, and New Super Mario Bros. Wii looks awesome. Anything else good out there?
Posted by Kevin Keele at 9:27 AM

How do you have time to play all those games, keep your blog updated AND carve the best pumpkins on the planet?

Nice anatomy study, and light´s and colours are creepy , I like them.
.By the way , thanks for your coment in my blog.
.I hope see other soon!

To answer Dave's question, I have a theory that you are in fact one of a number of clones that have a conglomerate mind. Great painting by the way! I like it a great deal despite despising Kratos.

Awesome painting! I love how heroic all your figures look.

I never gave God of War a try because I felt like rebelling against the critics who raved about it being a really original action game (I'd never betray you, Devil May Cry!), but maybe I should give it a try. ...Now where did I put my PS2 controller...

Anonymous said...
This comment has been removed by a blog administrator.
12:30 AM

Kevin! you are a machine! three games and a movie back to back?! how?! and your art is phinominal as always, and Uncharted 2 indeed is the greatest game ever, and am sure I would be right there with you if I had kept playing it, but I am spending my time doing stupider things...

I agree with Jake "You're a machine!" I love art. Video games are awesome. I'm playing the New Mario Bros Wii, and Uncharted 2 on hard. Both games are great fun.

The New Super Mario Bros. game IS awesome. My hubby and I have been playing it all week and we love it.

I really like the idea of video games but I have a hard time playing most of them, because I am a total wuss and can't stand it when things jump out at me. I get way too tense when I am playing. Super Mario and Zelda are pretty much the only two games I've ever been able to handle, and Zelda only barely.

(Popped over here from your wife's blog, by the way. I am stalking her, friend...ily? In a friendly manner, with the stalking.)