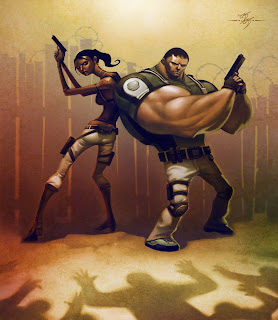 It has been far too long since I did one of my video game posts and part of the reason is because of Resident Evil 5. I've played it start to finish about 5 times, at least once on each difficulty, and earned the Platinum Trophy. Yes, I'm awesome. The game is great, though not as good as RE4 (but, really, what is?). The new additions to the series are great (co-op, Sheva), and the old stuff is still entertaining (cheesy-cool storyline, shooting zombies). The horror element has been even further diluted and I, for one, am happy to see them trying new things. The game focuses almost exclusively on combat and Chris (whose phisique I've only slightly exagerrated) and Sheva (the main characters) are super strong zombie killing machines. The new Silent Hill game (called Shattered Memories) puts you in the shoes of the most average of individuals removing combat completely, making monsters something you can only run or hide from. What makes me happy is that two of my favorite Survival-Horror franchises, which started out with similar gameplay, are both going in such different directions.

Currently Playing:
Final Fantasy VII (again) - I just downloaded it from the PSN and copied it to my PSP. I forgot how great this game is! It's reputation is well deserved, one of the best ever.
Patapon - Fun.

Recently Finished:
Final Fantasy VII: Crisis Core - loved it. It was been especially fun to go straight from this into FFVII. I plan on continuing my FFVII marathon by watching my Blu-Ray Advent Children after I'm through with FFVII and even playing the poorly reviewed Dirge of Cerberus after that...Epic.
Ghostbusters: the Game - Better than I expected. Nothing great but a solid experience overall.
Fallout 3 - I didn't finish the game (It's huge!) but it kept me engaged about as long as Oblivion did. I love the environment, the V.A.T.S. system, and the sense of discovery. Ultimately, however, the lack of a compelling narrative and mundane/repititious missions killed my interest.
God of War I and II (again) - Gamers seem to be leaning in preference more and more towards the procedural, sandbox experience (like Fallout 3). I still far prefer a straight, focused game. The God of War games are about as linear as they come but the experience is relentlessly captivating in every way. I can't wait for GOW III.
Killzone 2 - I'm not a big FPS fan, but I got this one mostly to admire the tech on display (and there is A LOT to admire). I ended up really enjoying the game as well.
Dragon Quest V: Hand of the Heavenly Bride - I don't know what it is about Dragon Quest games, they're so simple and essentially all the same, but I just can't get enough.

Anything else good out there?
Posted by Kevin Keele at 12:05 PM

BlazBlue if you like fighting games. Great just for the character designs. Spiritual successor of Guilty Gear if you've heard of that one.

I love Little Big Planet! I've got to try BlazBlue. Some guys at my work have been playing it.

I love that drawing Ken, especially Chris who, as you put literally is just a little over exagerated, I too am excited for Shattered memories and am playing Didd's KongQuest and Sphinx.

The color are amazing.. and the art is monster! \o

Any time a game in your home is keeping you from creating great art I'd call that Resident Evil.

Holy smokes Kevin.. You out did yourself, and that's hard to do even for you. So awesome.

There's a sculpt-like quality to her left leg that is flat-out amazing. How do you do it?

What? Not FREE LOVE Tattoo on his arm? Oh wait, wrong Resident Evil. While I can't say I am a big fan of RE, I can definitely see why everyone else likes it. Lately it's all been about InFamous for me. I love that game, and although it has an open sandbox feel to it, I thought the game was pretty linear, and I liked it. Up next for me is the Zelda series until the big holiday season.

Miche said...
This comment has been removed by the author.
2:46 PM

Yes!! I was wondering when you were going to a Resident Evil 5 painting. Great style and perfect colors for these this unbeatable duo. Right Now I'm Playing Resident Evil 5 for the third time on Pro and Zelda TP. I recently passed Super Mario World and Monkey Island chapter 1.

Josh - How is Monkey Island ch. 1? I played Telltale's early Sam and Max games and thought they were so terrible I haven't wanted to try their games again, but I heard they've gotten better.

I liked Monkey Island ch. 1. However it was really short for a $10 game I thought. It was a good dose of Monkey Island grog and a few chuckles here and there. Overall I enjoyed playing it, maybe not compelling enough to buy ch. 2 though. Not amazing but ok/good.

Love your character designs, as usual. Though I must say, I don't think your guy needs a gun, he's got two jack hammers built in. Zombies check in, but they don't check out.

Yeah, you were right at the point on the description... You're awesome. You have a priceless quality in your work, man. Amazing!