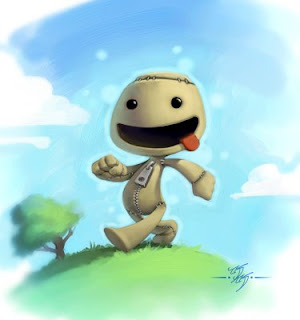 I've had LittleBigPlanet for a few weeks now and it is genuinely wonderful. I've never seen a game with such ineffable charm. Whether it's the inspired art direction or the delightful narration by Stephen Fry or the marvelous soundtrack or it's sweeping accessibility- the game is just impossible not to love. My two year old son watches me play and frequently laughs because the game is adorably captivating. He likes to wave at the Sackboy on the screen (I, of course, always make him wave back). Heather wants a Sackboy or Sackgirl as a pet. When playing it with others, everyone ends up laughing. This game is for everyone and it's just plain fun.
I just finished and published my first created level over the weekend (and I think it compares fairly well to other user-created levels). It's called "Sackboy Jones" by kanyn. Play it, heart it, give me feedback. Thanks!
Right now I'm playing:
LittleBigPlanet - Endlessly fun!
Star Wars: The Force Unleashed - Better than I expected but not quite the home run it could have been.
I've recently finished:
Silent Hill: Homecoming - This ended up feeling like a montage of the most popular elements of previous Silent Hill games and the movie. Anything new it introduces doesn't fit the unique SH atmosphere. Ultimately it feels like a competent tribute to SH games instead of a real addition to the series. There are a few small additions that I love but they're too small to carry the game beyond the realm of mediocrity. The SH franchise is in real need of a reworking the way RE4 so successfully did with Resident Evil. Until that happens I just can't muster the enthusiasm I once had for this series.
Dragon Quest IV: Chapters of the Chosen - This is a must play for fans of old-school J-RPGs. I loved it.
What are you playing?
Posted by Kevin Keele at 8:59 AM

Fallout 3. Best PC game of the year, in my opinion, though it's definitely not something you can play with children around.

As you well know, I am a fan of anything and everything cute - your picture totally captured the playfulness of the whole game. And even though I kinda suck at it sometimes (I mean, how hard is it to just grab something and swing?), LBP is definitely one my favorites of all your games. And everyone does need to play Sackboy Jones - it's awesome!

Fable 2, World of Goo (you really should check out), and Super Mario RPG.

right now. I'm playin' the Mirrors Edge Demo like Crazy, and this thurs. I will be playin' it...I also love beyond compare your pic. also World of Goo^ is super fun!

All hail Sackboy! He's amazing! As is the rest of your work. Really terrific stuff. You're work is always (somehow) improving. I respect that a lot.

Sackboy's got quite an upbeat gait to him!

Oh, how I wish I had a PS3 to play Little Big Planet and MGS4. Instead, I've sold my soul (and social life) to WoW-- level 80 and a whole new set of epic gear is like a siren's song to me!

Nicole - I didn't really like Oblivion so I still can't decide if I want to play Fallout 3 or not. I'll probably give it a try (after my son has gone to bed) because it does look really cool.

El Fro - I know very little about World of Goo except I keep hearing how great it is. It might give me an excuse to turn my Wii on again!

It's less of a clutch and more of a fist-of-iron-in-a-velvet-glove hold. I'm always impressed by Blizzard's art team, however.

I can't get enough of that cute little Sackboy. That's the game I've mostly been playing. Also Gears of war 2 is awesome and Kicks butt.

I have recently finished- World of goo, The Force Unleashed and Resistance: Fall of man.

Love the pic Kevin. As the Gamestop clerk said, anyone who doesn't think Sackboy is cute just doesn't have a soul. Right now I am playing Little Big Planet, with my new level coming soon. When I am not playing that I really just play COD4 online or Rock Band or Mario Kart Wii with the wife. I am also about to restart Heavenly Sword again, so that's about it for me till Christmas.

hahaha judging from the pic, this game seems like REAL SUPERCUTE FUN!! thanks for the review, will play and get back to you...

a pretty awesome blog you have here, thanx :)

Okay I'm OBSESSED with this game! We got it for Christmas and it's been some awesome bonding time for my little sisters and I haha.

I've been playing Soul Calibur IV and (honestly) Lego Batman. It's my favorite Lego PS3 game so far - The different abilities of all the Villains and Bat-suits keep it interesting. And yes, I DO feel like I'm 10 years old when I'm playing it hah. I'm okay with that :)