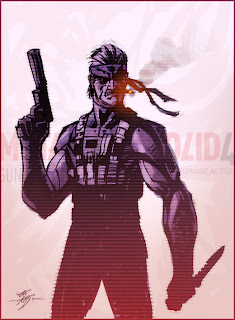 I'm a pretty new Metal Gear Solid fan. I played the third not long after it's release but have only recently played the first and second. Their ridiculous plots and unforgettable characters are pretty addicting and totally awesome. I am very excited for the 4th installment of the series being released in a couple weeks and thought I'd try my hand at a little Shinkawa style art. I recognize some of the anatomy is off, but that's also in keeping with the Shinkawa style...also I just sketched it out quickly with a brush pen.

Right now I'm playing:
Dementium: The Ward - So far a very fun DS FPS/Survival Horror game. Something I never thought would exist on the DS (let alone be successfully pulled off).
Disgaea: Hour of Darkness - I've never played a Tactical RPG before so I thought I'd try one. I like the character designs and it got good reviews and so far it's pretty cool.
Indiana Jones and the Emperor's Tomb - This is a relatively old PS2 game that I picked up just because I've been excited about Indy lately. I wasn't expecting it to be very good but I'm actually quite surprised by the fun gameplay, solid story and quality voice work. The graphics, however, look like something from the PS1.
I've recently finished:
Resistance: Fall of Man - Awesome! I can't wait for the sequel.
MGS2 & 3(again) - As I said above, these games are great. There's nothing else quite like them.
You playing anything good?
Posted by Kevin Keele at 3:53 PM

I love to see you experimenting with different styles. Too many artist IMHO find a style and stick to it. They never try anything new and don't progress as artists.
Way to go.

Ah, good old Snake! I love those games, especially the 3rd. You've done a really good job at emulating that style. I almost thought it was proper promotional art for the game.

Fantastic work Kevin. Lovin' those caricatures. Something I need to work on. I keep saying that...

KEviN! awesome stuff right there! I love the massive arms! but right now I'm going through a Zelda phase recently passing Phantom Hourglass, and I am playing Wind Waker again, and plant to start Twilight Princess soon after.

I just beat MGS4 and let me say that it is a FREAKING MASTERPIECE!!!! Love the picture dude and can't wait to hear your review on the game.