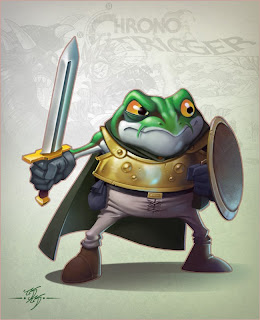 It's my monthly video game themed post! I think there's no better day to do it on than today, the day when the biggest video game ever is being released (that's Grand Theft Auto IV by the way). Which means that for today and the following weeks we'll all enjoy the numerous news stories about how this game turns kids into homicidal drug dealing criminals. I will not be playing it. At least not for a couple months. I'm under a self imposed game buying freeze. I was buying a lot of games and not playing them because my "to play" pile was getting bigger than my "currently playing" pile could ever catch up to so I'm trying to exercise some self control and finish what I've got before I get more. My gaming embargo will be lifted on June 12th (coincidentally in time for Metal Gear Solid 4) but until then I've got plenty to play.
Right now I'm playing:
Resistance: Fall of Man - Why this incredible FPS doesn't get more attention than the very average Halo series I'll never know.
Metal Gear Solid 2 - This is the last of the previously released Metal Gear Solid games I've not played. This is one of those video game franchises that tells the type of story and has characters and situations in it that really could not successfully exist in any other medium. They are all so weird and wonderful.
Rock Band - Still Awesome.
I've recently finished:
Zack and Wiki - I actually liked this game less when I finished it. The early puzzles are short, fun, and solvable, but near the end cease to be any of those things. I'd still recommend it, just not as glowingly as I did last time I posted.
Metal Gear Solid - Fun, engaging, challenging, rewarding...I love this game.
Chrono Trigger - Frog is a character from this game (in case you were wondering why I painted a frog with a sword and wearing armor), he's a warrior cursed to look like a frog and he speaks in old english (how cool is that?). He's my favorite character from the game and he's also got a great musical theme. If you like JRPGs and retro games definitely track down a copy of Chrono Trigger.
Games I started to play, but didn't like very much, and stopped:
Devil May Cry 4 - This is a good game, the DMC series is just getting stale. I highly recommended it if you haven't played any of the others or you just loved the others so much that more of the same sounds great to you. I just got a little bored.
Super Smash Brothers: Brawl - I tried to get into this series with Melee and just didn't get it. I tried again with Brawl and I still don't get it.
Anyway, what are you playing? Anything good?
Posted by Kevin Keele at 12:21 PM

Excellent character there Kevin! I have to really limit myself on the video game play time, since I have very little free time anyway- so all I ever end up playing is Guitar Hero in some form or another. Currently trying to beat GH3 on the expert level. Pretty tough stuff when you get to about the 24th song. By the way, I watched your tutorial on shape usage the other night. Right as I finished, I glanced out the window to see about 6 fire trucks at my neighbor's house, spraying down some 50ft flames. (seriously!) I may have to avoid watching your tutorials in the future if they are going to wreak that kind of havoc! (Actually it was a great tutorial. Thanks!!)

Like the Frog, and the backround is also cool...I've recently beat Brawl, and I am playing "Ocarina of Time" and "Super Mario World" on Virtual Console.

Right now, I'm only playing Rock Band. It's lots of fun - I think I may be able to play bass on hard. What?! That's pretty good for a non-gamer like myself!

Anyway, although I made fun of Chrono Trigger (and gave it an awesome nickname), I have to say that I think it's cool that you can play old games with characters that are just a cluster of pixels and still enjoy it. Some people just like what's new and flashy because it's new and flashy. You're a very well-rounded gamer (even though you hate that term).

Though I'm not a hardcore gamer, I still enjoy a game from time to time. I grew up with the Atari game systems, and miss in some nostalgic way, the old 15-pixels per character games.

Awesome work Kevin. Your frog is amazing, and all the stuff on your site (that I missed looks fabulous). The lighting on your Wii Warrior is stunning. Great Tutorial too!

Hey Kevin,
As far as video games, afraid I am not rich enough to buy them. so, unfortunatly, I don't play.
I have left another comment, and tried to email you...hoping 3rd times a charm!! oh, good to hear your voice again (In the tutorial)
If you get the time, email me
Traciebaby@hotmail.com
(Tracie Shepherd--Hunsaker)

This may sound crazy, But I love making video games much more than I like playing them. I don't do well when I play, cause I am continually looking at how a piticular model was made or textured.
Awesom frog. Great, as usual.

That's funny I ran into the same thing. I'm almost done with my games though, after assassins creed I have Devil May Cry, then I'll be good. My big problem, is Halo on-line is so much fun.

Patrick, I'm very impressed you're playing GH3 on expert! Good luck dude, I had a hard time beating GH2 on Hard, they increased the difficulty level from GH1 so I imagine they did it again for 3.
Jake, you're playing Ocarina of Time again?! Not that I disapprove, it is one of the greatest games ever made.
Heather, I love playing Rock Band with you.
Ken, aren't those old Atari games cool?
Tracie, hey! I promise I'll email you back.
Dad, I'm downloading Echochrome tonight, I don't think you'll be too distracted by the models and effects to play that game.
Richard, I feel you bro. There's just too many good games to play.

That sir, is just awesome. Frog and Robo are my favorite too.

I be playing Mario Kart Wii, and silent hill 1. Soon will be starting Assassin creed and Lego Star Wars. Only because my boss bought them for the PS3. Cool Frog.

Virginia, thanks! Robo is great too. I loved his whole backstory with the pink girl robot and everything...so awesome.
Niel, so far I'm not too far into MGS2 but I really liked Snake Eater and I REALLY liked the first one. Have you played that one? Are you planning on playing number 4?
Josh, the first Silent Hill is one of my all time favorites. You'll have to let me know what you think of Assassin's Creed, I was kind of "meh" about it. You know I don't care for the Lego games, but I like Mario Kart. I'm just not sure if I want to get the Wii Mario Kart since I'm starting to get tired of that series. They seriously need to change it up a little. Sometimes I don't know if Nintendo knows how to do that. I'm a Nintendo fan but I wonder why a company so innovative with their hardware can't be, or refuses to be innovative with their franchises.